One discussion this week included a trial out of Denmark comparing D1 and D2 lymph-node dissection for gastric cancer.

Summary: Curative resection is the treatment of choice for gastric cancer, but it is unclear whether this operation should include an extended (D2) lymph-node dissection or a limited (D1) dissection. The authors conducted a randomized trial in 80 Dutch hospitals in which they compared D1 with D2 lymph-node dissection for gastric cancer in terms of morbidity, postoperative mortality, long-term survival, and cumulative risk of relapse after surgery. 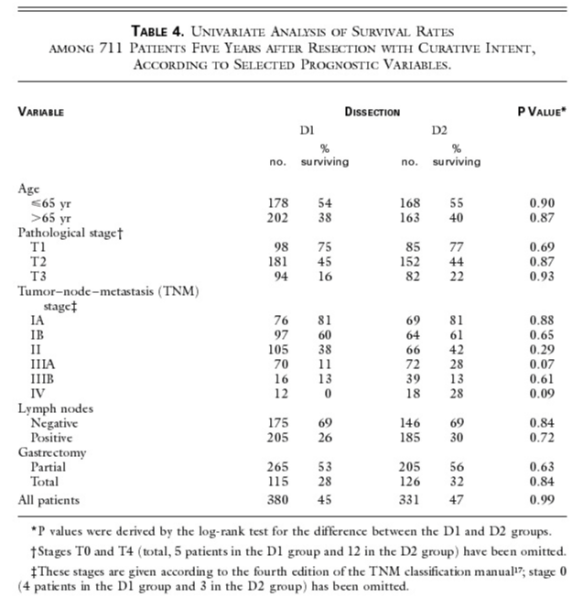 One of the arguments for D2 dissection is its ability to reduce rates of local recurrence, thereby increasing the quality of life. The distressing finding of local recurrence, usually in a terminal phase of the disease, often leads to second operations to restore gastrointestinal continuity. In this trial, there was a tendency toward a reduced cumulative risk of relapse after D2 dissection, but the rate of relapse remained high and the difference from D1 dissection was not significant. A subgroup analysis indicated a significant or marginally significant difference for patients with disease in UICC stages II and IIIA, but this difference was attributable largely to stage migration.