Results: Preoperative splenic artery embolization plus laparoscopic splenectomy was successfully performed in all patients in group 1. One patient in group 2 required an intraoperative conversion to traditional open splenectomy because of severe blood loss. Compared with group 2, significantly shorter operating time, less intraoperative blood loss, and shorter postoperative hospital stay were noted in group 1. No marked significant differences in postoperative complications of either group were observed. Compared with group 3, group 1 had less intraoperative blood loss, shorter postoperative stay, and fewer complications. No significant differences were found in operating time. There was a marked increase in platelet count and white blood count in both groups during the follow-up period.

Conclusions: In the setting of massive splenomegaly, LAS or HALS with preoperative SAE is safe and has a low conversion rate. Postoperative imaging surveillance for PVT should be performed routinely in this patient population. 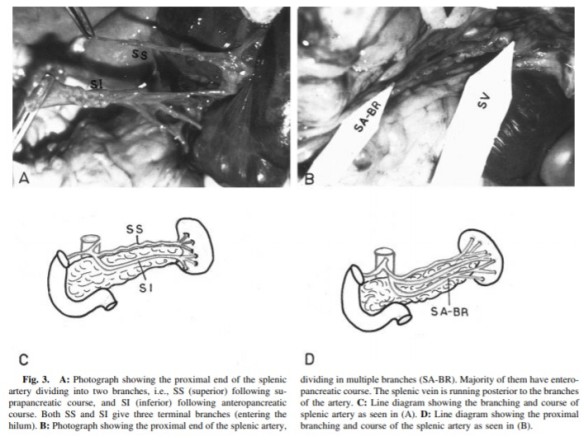 “The variations in origin, course, and terminal branching pattern of the splenic artery were studied in 320 cadavers. The artery originated from the coeliac trunk in the majority of cadavers (90.6%), followed by abdominal aorta (8.1%), and other sights (1.3%). A suprapancreatic course of the artery was commonly observed (74.1%) followed by enteropancreatic (18.5%), intrapancreatic (4.6%), and retropancreatic (2.8%) courses.

In two cases (0.63%) the proximal part of the splenic artery made a loop that was embedded in the substance of the pancreas, which is an interesting and rare finding. In five cases (1.5%) the proximal part of the artery divided into two or more branches that had suprapancreatic and enteropancreatic courses. The splenic artery divided into terminal branches in 311 (97%) cadavers. In nine (2.8%) cadavers it passed through the hilum of spleen without dividing. Two terminal branches were the most common (63.1%) followed by four (18.8%), six (9.7%), and more than six (5.6%) branches.

The present study clearly indicates that there is variation in origin, course, and terminal distribution pattern of the splenic artery. The knowledge of these variations are of significant importance during surgical and radiological procedure of upper abdominal region to avoid any catastrophic complications.”