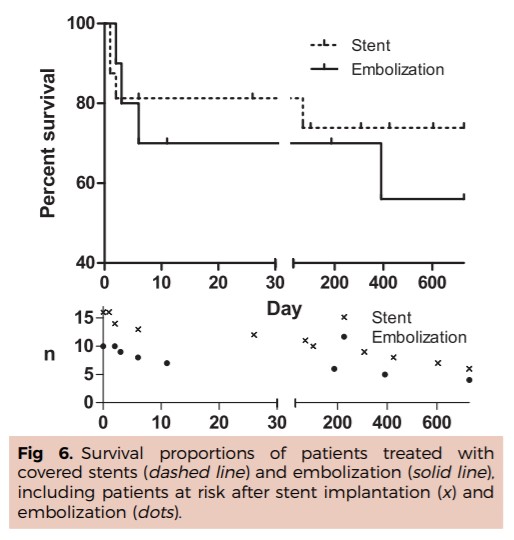 RESULTS: Covered stent placement was successful in 14 of 16 patients (88%); embolization was successful in 10 of 11 (91%) patients. For the embolization group, the overall 30-day and 1-year survival rate was 70%, and the 1- and 2-year survival rate was 56%; for the covered stent group, these rates were 81% and 74%, respectively. The 30-day patency of the covered stent was 84%, and 1-year patency was 42%; clinically relevant ischemia was observed in two patients. Infarction distal to the embolized vessel occurred in 6 of 11 patients (55%).

CONCLUSIONS: Endovascular treatment using either covered stents or embolization techniques is an effective and safe emergency therapy for life-threatening postpancreatectomy hemorrhage with good clinical success rates and long-term results. Covered stent placement preserving vessel patency in the early postoperative phase should be preferred to embolization if it is technically feasible.

CONCLUSIONS: Covered stents and coil embolization are effective for managing PPAH and maintaining distal organ perfusion to minimize morbidity and mortality. Recurrent bleeding is common and most often occurs from new sites of vascular injury rather than previously treated ones.

TABLE 1. Summary of Results of Patients With Postpancreatectomy Hemorrhage After Pancreaticoduodenectomy

CONCLUSIONS: Our 10-year experience supports current algorithms in the management of PPH. Key considerations include the recognition of the sentinel bleed, the presence of a pancreatic fistula, and the initial operative role of a long gastroduodenal artery stump with radiopaque marker for safe and effective embolization should PPH occur.

More PubMed results for stents and coils for PPH.