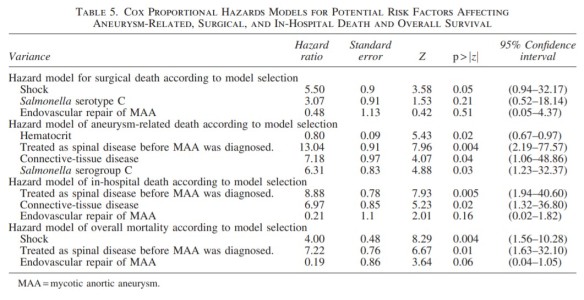 Results: All of the patients had positive blood cultures, radiologic findings typical of MAA, and clinical signs of infection (leukocytosis, fever, and elevated C-reactive protein). The mean age of the patients was 63.8±10.6 y and the mean period of their follow up was 35.7±39.3 mo. Twenty-nine patients with MAAs underwent traditional open surgery, 11 others received endovascular stent grafts, and four MAAs were managed conservatively. The most frequent causative pathogens were Salmonella (36/44 patients [81.8%]), in whom organisms of Salmonella serogroup C (consisting mainly of S. choleraesuis) were identified in 14 patients, organisms of Salmonella serogroup D were identified in 13 patients, and species without serogroup information were identified in nine patients. The overall mortality in the study population was 43.2% (with an aneurysm-related mortality of 18.2%, surgically related mortality of 13.6%, and in-hospital mortality of 22.7%).

Conclusions: Shock is a risk factor for operative mortality. Misdiagnosis and treatment of MAA as low back pain, co-existing connective-tissue disease such as systemic lupus erythematosus and rheumatoid arthritis, and Salmonella serogroup C-associated bacteremia are risk factors for aneurysm-related death. Endovascular repair should be considered as an alternative option to the open repair of MAA.

Conclusions: If patients with Salmonella-infected AAAs have good responses to preoperative antibiotic therapy, in situ prosthetic graft replacement is a viable revascularization method, even in the situation of periaortic abscess presentation formation.

Results: Twenty-one (47.7%) of the mycotic aneurysms had already ruptured at the time of surgery. Free rupture was present in nine patients (20.5%). Contained rupture was observed in 12 patients (27.3%). Urgent surgery was performed in 18 cases (40.9%). Revascularisation was achieved by in-situ reconstruction in 37 patients (84.1%), while extra-anatomic reconstruction was performed in six patients (13.6%). One patient (2.3%) was treated with a combined in-situ and extra-anatomic reconstruction. In one case (2.3%), endovascular aneurysm repair (EVAR) was performed. In-hospital mortality was 22.7%, 50% in the extra-anatomic reconstruction group and 18.9% in the in-situ repair group. One-third (33.3%) of our patients, who presented with a ruptured mycotic aneurysm died in the peri-operative period. This mortality was 13% in the patient-group presenting with an intact aneurysm. Of the 34 surviving patients, 12 patients (27.3% of surviving patients died after discharge from our hospital. In half of these patients, an acute cardiac event was to blame. Three patients (8%) showed re-infection after in-situ reconstruction.

Conclusion: Management of mycotic aortic aneurysms remains a challenging problem. The results of surgery depend on many factors. In our experience, in-situ repair remains a feasible and safe treatment option for patients who are in good general condition at the time of surgery.