“This publication summarizes the changing treatment paradigm for patients with left-sided diverticulitis. Although diverticular disease can affect any segment of the large intestine, we will focus on left-sided disease. Bowel preparation, enhanced recovery pathways, and prevention of thromboembolic disease, while relevant to the management of patients with diverticulitis, are beyond the scope of these guidelines and are addressed in other ASCRS clinical practice guidelines.”

END_OF_DOCUMENT_TOKEN_TO_BE_REPLACED

Conclusions: This is the first randomized clinical trial favoring PA with diverting ileostomy over HP in patients with perforated diverticulitis.

END_OF_DOCUMENT_TOKEN_TO_BE_REPLACED

One discussion this week included the operative management of diverticulitis.

Summary: A treatment algorithm is illustrated below (Nally and Kavanagh, 2018, p.7). 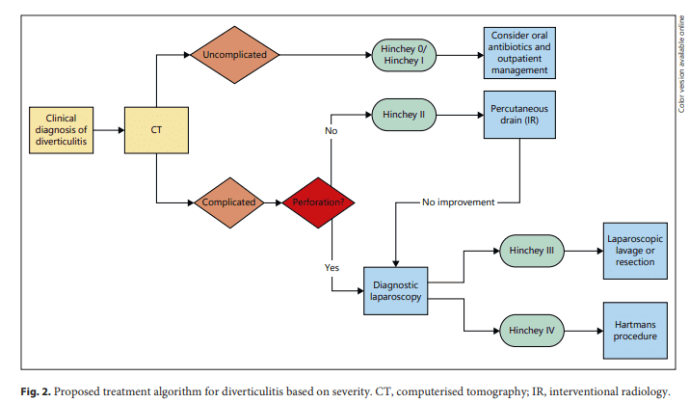 Nally and Kavanagh highlight three RCTs comparing laparoscopic lavage and resection (Table 4, p.8): SCANDIV (2015), LOLA (2015), and DILALA (2016).  The main differences in the RCTs were the re-intervention rate, which varied according to when results were reports (prior to the time of expected stoma closure) or if stoma closure is specifically excluded. Surgical reinterventions accounted for a majority of adverse events.

Originally a 3-stage operation, it was condensed into a 2-stage Harman’s procuedure in which the diseased segment was removed during initial laparotomy. This became the standard of care, yet the mortality rate is cited as 15% according to the SCANDIV study. Additionally, a Hartman’s procedure is limited by the morbidity and mortality of colostomy reversal or lifestyle implications of a permanent stoma for up to 60% of patients (p.8). A one-stage resection with restoration of continuity avoids some challenges but also creates concern about performing an anastomosis in a contaminated environment for a critically unwell patient.

Approximately 15-30% of patients have recurrent episodes of diverticulities. Up to 30% have ongoing pain. There are 2 indications for elective surgery:

Guidelines from the American Society of Surgeons of Colon and Rectal surgeons from 2000 recommended an elective resection after one or two episodes of acute uncomplicated diverticulitis (p.9). Currently, professional bodies included the AGA advise again routine resection and instead propose an individualized approach (p.9). Morbidity and mortality of elective procedures for diverticulitis can be significant.

Conversely, elective surgery to improve quality of life is coming more to the fore (p.9). A systematic review of 21 studies and more than 1,800 patients and an RCT – the DIRECT trial – with 109 patients seem to provide evidence in favor of resection. It must be noted that the RCT was terminated early.

Nally and Kavanagh (2018) conclude that diverticulitis is a common yet challenging topic that demands clinicians to provide an individualized yet evidence-based approach (p.1).